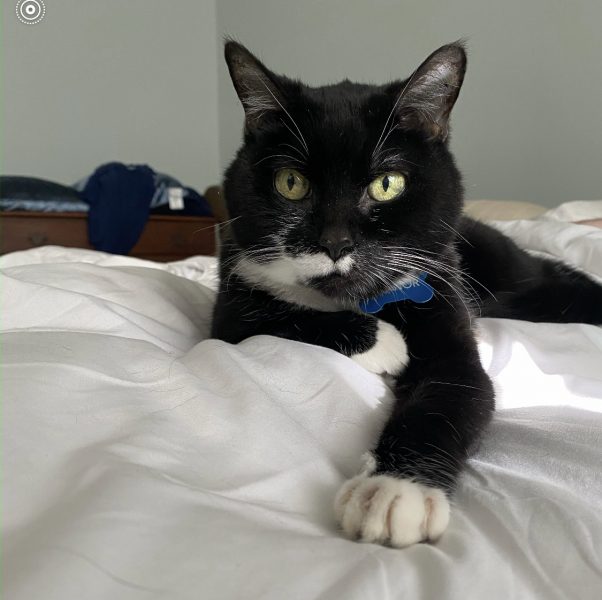 Eleanor was born in the Spring of 2004 in/or near Winnabow, NC. She came into our lives in the Fall of 2004 when she was about 9 months old. Chelsea & Allie went to go see the “kitten” that had been living at G. G.’s house for several weeks. When called a young black and white cat ran screaming up to Chelsea. She was very friendly and it was decided she would be brought back to Wilmington to Chelsea’s mom’s house. She looked out the window as we drove away. Allie, being 9 years old suggested calling her “Oreo” but since she was a tuxedo Chelsea thought she needed a name of a lady. She was quickly named Eleanor. She first lived with 4 other cats and wasn’t impressed. Eleanor would taunt the partially blind cat Gracie. It was here she endeared herself to Jon, who had recently moved to Wilmington and was also adjusting to new surroundings. The two bonded and Eleanor became a fixture in Jon’s lap. This continued for the rest of her life. When Jon, Chelsea & Allie moved Eleanor went with them. Eleanor was happy to be an only child and thrilled that she had been gifted a new apartment. She enjoyed talking to her outside lizard friend that got caught in the window screen a couple of times. She would race down the long hall but she wasn’t a good hunter and even lost a grasshopper in this empty hall. After moving to the apartment she did not like going outside even though once in a while Jon would walk her outside and she would wail. Eleanor once spent a scary night in the apartment hallway and even went out on the ledge over the back porch. This was one of the few times she proved she was a real cat as she had to back up 6ft or more on this small second story ledge. In 2007, she moved into a house and was thrilled with nearly double the space. Her brother Orson was adopted June 16, 2007. Eleanor wasn’t impressed and bossed him around. She would randomly smack him to be certain he knew she was the boss. In 2019 she moved from Wilmington,NC to Huntersville, NC. She enjoyed running and yowling in the longer hallway upstairs and rolling on the backyard patio. Eleanor leaves behind her father and her person Jon, her mother Chelsea, her sister Allie, her frenemy Esther the rabbit, and her nemis Diggory the rabbit(she will not miss him at all). Eleanor always felt the need to meet everyone that walked in the door, greeting them with a meow as she walked by or walked up to them. Eleanor was a bossy yet sweet and loving cat. It’s hard to imagine life without her constant presence – her “bunnying” on the floor, her unique vocal stylings (often prior to 7 a.m.), her not always polite begging for chicken wings or Nathan’s Angus Beef Franks, and most of all her contented purring while curled up beside us on the couch or bed or while stretched out on Jon’s lap. Eleanor was a special cat who loved her family and she was loved back so very, very much. 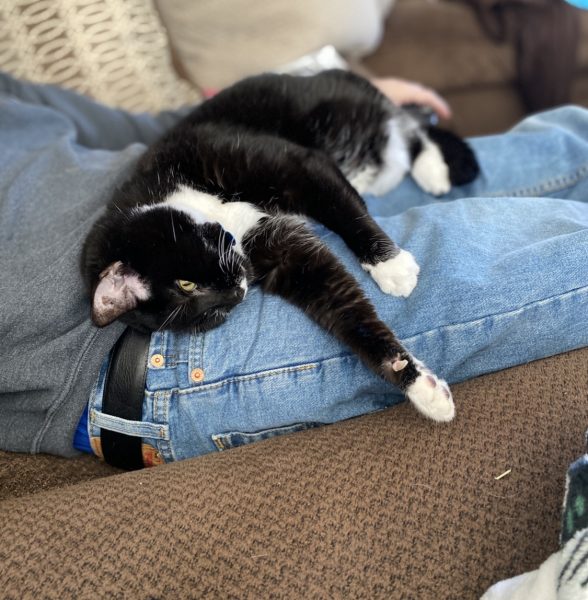