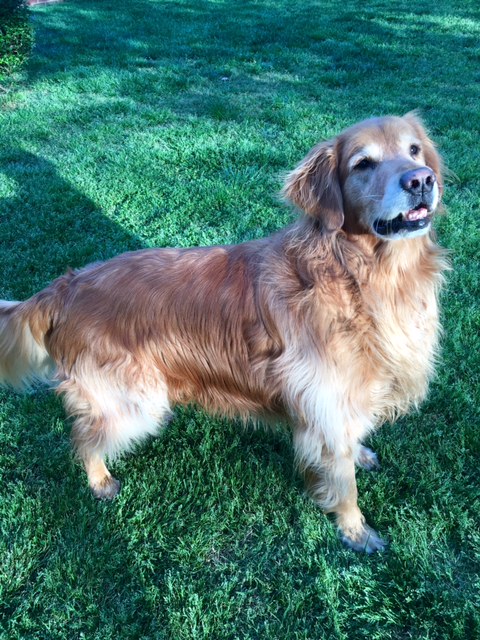 Though Blaze was here just a short time on this earth, he commanded such a big presence. He was SO lively and energetic. He loved it when Papa would come home so he could play “Pants on the ground”. When he got Rob down on the ground, he would then try to take his shirt off. If he detected any sweat/salt on Rob’s head, he would lick him incessantly.
He loved his little “Nose” games where he would nudge the ball just far enough to move, then “LUNGE” on it so it wouldn’t fall off the couch. On 100’s of occasions, he would come over to us and drop the ball, then nudge/flip it with his nose so we would play with him.
If there was ever a life of the party, it was Blaze. You just couldn’t walk by him and not touch him. He just loved life so much. He never met a stranger; Everyone that ever met him just fell in love with him and his energy. He was definitely Momma’s boy, but yet he loved to fight with Papa!
He would have nightmares just about every night, and we had the privilege of going out, stumbling in the dark to find him, wake him and comfort him and let him know that that Black bear would not harm him….. He loved sleeping behind the couch, where he would be jammed in there between the couch and the wall; just sliding down into position with his legs under the couch, and night-night he went…. only later to be awoke by us, thankful that it wasn’t that bear!
He just adored his sisters, Gabby & Amber. He would always defer to his sisters, or anyone he deemed in charge. He & Gab used to just charge and play for the longest time, until the day came when Gab couldn’t get up and chase him, so she just laid there and bit at him on the way by….
We can’t wait to see him & Gabby again. Right now, he is busy playing with both of his predecessors, Timber & Gabby. He just got to meet Timber Oct. 21st; he heard so much about her. They will wear him out til we get there……
Rob & Debbie Shaw